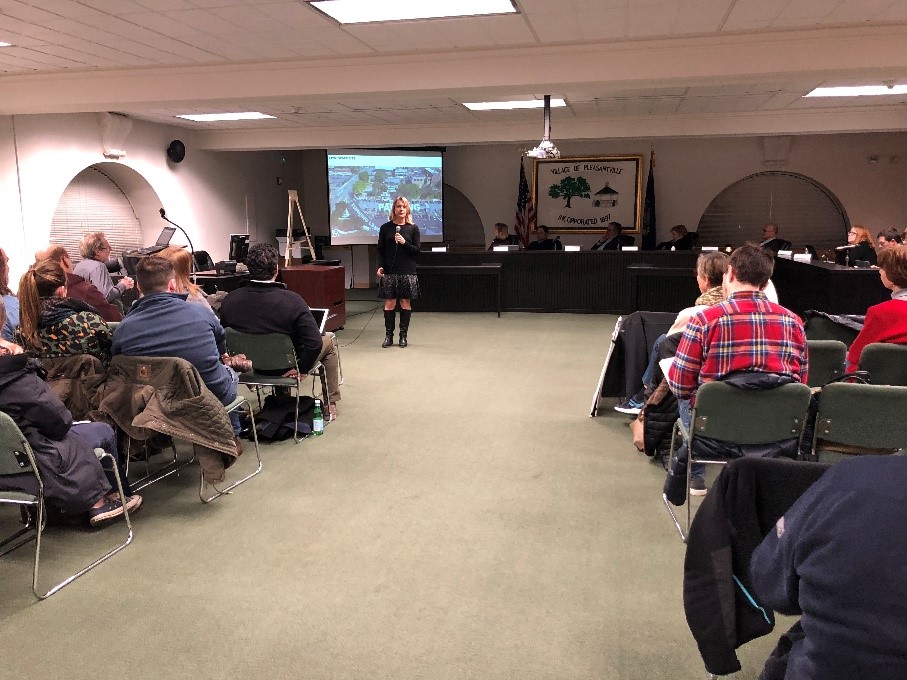 Pleasantville officials presented their initial designs and goals last week as they continue to work on redesigning a portion of the Memorial Plaza civic space.  The Mar. 5 meeting at Village Hall took input from residents and other village stakeholders who offered ideas during previous workshops for potential improvements to the roughly half-acre space on the west end of Memorial Plaza.  With the village having obtained a $1.5 million state grant which would pay for the majority of the work, Mayor Peter Scherer said officials are fulfilling a goal of upgrading the streetscape along Memorial Plaza and Manville Road. The village would have to include about $750,000 for the project, he said.  Pedestrian walkways would be enhanced on Manville Road from Grant Street to Tompkins Avenue, and the turn lane from Memorial Plaza onto Manville Road is expected to be removed to create a more attractive and communal area.Landscape architect Jamie Maslyn Larson, of Wagner Hodgson Landscape Architecture, said the Village Board agreed to expand the proposed quarter-acre space to more than a half-acre after residents voiced enthusiasm for the project. She said the larger space promises to create an intimate, comfortable and accessible space that could host an array of events and activities while also accommodating many suggestions made by residents.Project planner Phil Myrick, a Pleasantville resident, said the concepts and goals for the project are unique to the community. He said the feedback he’s received reflects how important a social and civic space is to the village. “It’s something we don’t really have,” Myrick said. “It’s very exciting to a lot of people that we can make this central gathering space.”Larson presented a plan that is broken into four sections interwoven into each other and designated for different activities. The design includes a multiuse plaza, a casual porch and a bosque, a grid of trees landscaped into a specific design. The walkways within the space would comply with the Americans with Disabilities Act (ADA). She said the lawn would be able to hold more than 300 people. Plans call for the war monuments at the north end of the plaza to be relocated onto the lawn to create a dignified space, she said. “It allows people to have casual access to these memorials, actually see them every day and read the names and read the stories,” Larson said. “So, it finally has a place of purpose in this space.”The porch is designed to be located adjacent to the Metro-North train tracks but would be a more intimate and remote area for gatherings or for people to read. Larson said she hopes to integrate hedges and plantings to make it lusher and add to the natural shadiness of the area. The bosque would provide shade for bistro-style chairs and trees would be illuminated with special lighting.A multi-use plaza in the center would be project’s centerpiece and be an “extremely playful” area, Larson said. Visitors could walk through it and it would accommodate the farmers market, food trucks, a water feature or an ice rink. She said the plaza would also feature a granite mosaic design feature that represents the village.“I’m pretty excited about the plaza, about a flexible space but it’s a real opportunity to really mark this particular site with a significant beautiful design feature,” Larson said. “We cannot make this plaza just cast-in-place concrete. It would feel really sad.”  She said the next phase of the project is to include public feedback on the design.Engineer Jeffrey Contelmo said roadway improvements include widening the intersection from Memorial Plaza onto Manville Road to create a right turn lane at the traffic light. He added that pedestrian crossings will be enhanced with textured paving to create a shorter and safer crosswalk that is ADA accessible.  Scherer said the civic space development would result in the loss of about 25 parking spaces along Memorial Plaza.“What we’re talking about here is something that’s been talked about for two generations of Pleasantvillians, and if 25 parking spaces is in the way of making it happen when the other ducks have been lined up in a row, we’ll find a way to make that work,” Scherer said. “Not going to miss this chance.”

WH are finalists in HGTV’s 2016 “Faces of Design” Program

Keith & Jeff were finalists in the 2016 HGTV “Faces of Design” Awards Program in the Waterside Retreats Category.

We are hiring in Hudson, NY